It Came from Venus 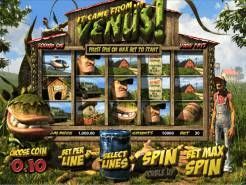 Play Now
The Betsoft gaming company do not disappoint players with this colorful game that is introduced through a small animated movie when the player logs on to the game. The scene is set in a farm in the middle of nowhere when suddenly an alien body is seen travelling towards the earth in the form of a Venus Fly trap plant. It lands right on the farmers door step and the player meets this incredible creature who is the focus of the game. There are five reels and 30 paylines in this colorful and entertaining slots game that is available in fun mode for players to try out before placing real money bets.

There are a number of special features in this slots game that make players understand the need to try it out before placing real money bets. If one or more of the food sack symbols lands on the center reel it is moved to a stack. When the player has accumulated three of the sacks he is rewarded with free spins during which food sacks act as sticky wilds and stay in place for one or more of the free spins. Random wilds appear during the base game and award players multipliers of between 2x to 10x the winnings for that spin. The scatter symbol is denoted by the farm sign and this offers multiplying payouts when three or more land anywhere on the screen.Five of the scatter symbols award players 300x the coin bet placed.

Doubling Up and More Bonus Features

If three of the same symbol appear on a reel when the player has placed a maximum coin bet, they tumble down to reveal more symbols giving the player more winning opportunities. Three of the helicopters on screen take players to a new screen to play a special bonus round where they have to try and guess where the Venus plant is hidden in order to take it away from the farmer. Each box reveals a different cash payout to the player. At the end of every standard spin the player may try and increase his winnings by doubling up. If choosing the double up feature, the player is taken to a new screen where he finds the farmer and the Venus plant. The player needs to guess if the plant will catch the ball that the farmer throws, if he guesses correctly the player doubles his winnings, if he doesn't he loses and is taken back to the main game. The player may continue with the double up feature for as long as he wants or until he reaches his gambling limit. This game is played with lots of humor and it gives every player a really good feeling with the fun that it evokes.
Play Now 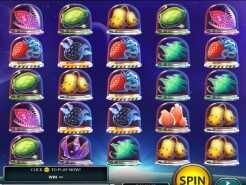 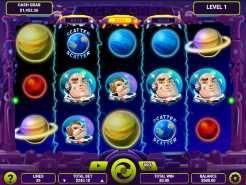 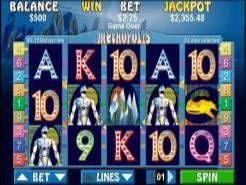